At this point in the novel, which is Catch-22 by Joseph Heller, the book is interesting because of the unusual amount of satire it has to try to expose the human spirit and provide a contrarian opinion to the general consensus that people fight war for their country rather than just trying to save themselves and avoid being a victim. For my upcoming literary analysis paper, I would like to explore the role satire plays overall throughout the novel rather than at specific points, and look at whether there are definite reasons to why the author employs this technique to complement his writing. A profound quote that represents the main character’s world view, who is Yossarian, is “They’re trying to kill me”, in which he says it in a calm manner during a fight. This serves as a proxy of his view on war because he believes that other people are trying to kill him and shrugs off counterarguments that refute that he personally is not being targeted.  This conclusion can be deduced early on in the book so the audience can be prepared for the actions that follow Yossarian’s view.

A particular disagreement I have with this book is that it is excessively sarcastic in its implied critique of traditional war stories and the glorification they sometimes have. While the view of war held by the common populace – where the prospect of war was celebrated – at the time before World War 1 was proven incorrect, I still believe soldiers still want to genuinely fight for their country. Even though Yossarian is a solitary character, Heller uses that to serve as a proxy to what most soldiers think and behave in wars and conflicts in general. However, I do agree with Heller’s main point that soldiers do not typically have an urge to go into faraway lands to bomb peoples they do not know.

A picture of the book: 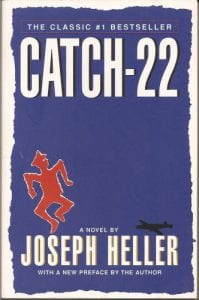 Since the story, which is Catch-22 by Joseph Heller, is a war story, the main conflict at the outset is the war itself and how it affects different types of people. Specifically this is about the main characters Yossarian who wants to get out of the war as soon as possible. This is because he sees war as solely one in which he is putting his life at risk and everyone is trying to kill him, rather than seeing it as a patriotic quest to fight for America. His views contrast with a patriotic Texan who serves as a foil to Yossarian, because he constantly views war as a noble enterprise in help America. Since this is a satirical novel, it is unclear how the character will receive a resolution other than Yossarian not having to fight the war anymore.

So far, the book as whole has been satisfactory but the diction is complex but sometimes extremely simple and somewhat similar to The Things They Carried. While researching this book, I found out that this was a satirical novel, and this is evident in the first chapter as the book starts out with Yossarian faking a condition in order to be temporarily discharged from duty. However, as the Texan later comes in, spewing his pro American sentiments, all of his mates from the ward miraculously recover and/or get sent to other wards to stop dealing with it. This immediately starts off the tone of the book as satirical and suggests throughout the upcoming chapters this will continue to be the same.

Children aren’t meant for war but neither are men  – what Yossarian would say. 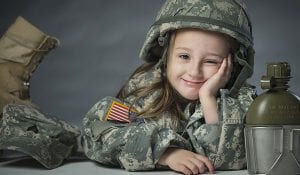